The Camarines Norte State College shall primarily provide higher technological and professional instruction and training in the fields of economics, agriculture, health, engineering, education, management, finance, accounting, forest research and conservation, business and public administration as well as short term technical and vocational courses. It shall also provide and promote research and extension services, advanced studies and progressive leadership in all areas of discipline and responsibilities. 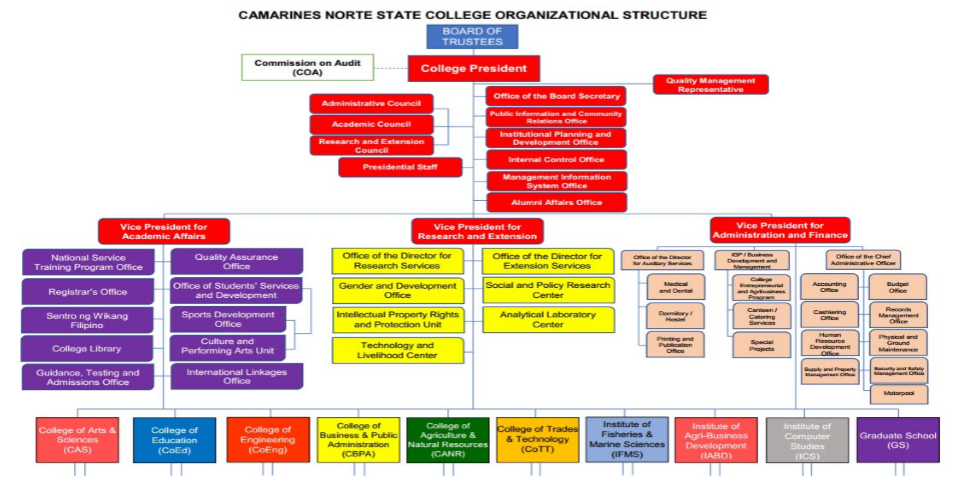 The institution’s task is primarily to provide higher technological and professional instruction and training in the fields of economics, agriculture, health, engineering, education, management, finance, accounting, forest research and conservation, business and public administration as well as short-term technical and vocational courses, provide and promote research and extension services, advance studies and progressive leadership in all areas of discipline and responsibilities.

The Abaño Pilot Elementary School, now Abaño Campus, has an area of 0.8684 hectares. It was established in 1953 and was designated the pilot school of the Division of Camarines Norte in 1959 and later became a regional pilot school by virtue of its good performance in the field of elementary education. Philanthropist Dr. Jose Abaño donated the lot. It houses the Secondary and Elementary Laboratory Schools of the College of Education and the CNSC Training Center.

The former Camarines Norte School of Arts and Trade (CNSAT), now the College of Engineering and Industrial Technology located in the town proper of Jose Panganiban, also of this province was organized during the early part of 1970 to develop manpower skills and to produce highly trained professionals in the fields of arts and trades. It has a land area of 8.8960 hectares.

And the Institute of Fisheries and Marine Sciences (IFMS), Mercedes Campus, is located in Barangay San Roque of the Municipality of Mercedes. The sprawling 11.0 hectare area showcases the aquaculture project, which would enhance the income generating potential of the State College. The Campus was formerly known as the Mercedes School of Fisheries which was established during the Martial Law period by virtue of Presidential Decree No. 1050 series of 1977.

By virtue of Republic Act 7352, the governing body of the Camarines Norte State College was vested in the Board of Regents chaired by Hon. Armand V. Fabella, the Secretary of Education, Culture and Sports. The chair was represented by DECS regional Director for NCR Dr. Nilo S. Rosas, who presided over all meetings of the Board from 1992 to 1994. The first two years of existence as a State College were the most memorable and tumultuous experience on the part of the faculty and staff  who were affected by the transformation of a secondary school into a higher educational institution. It was in 1994 when the new DECS Secretary, Hon. Ricardo Gloria assumed the post as chair of the Board of Regents. He was instrumental in making the CNSC grow from infancy, stand by itself and move towards the realization of its constituents’ dreams and aspirations.

In order to achieve a more coordinated and integrated system of higher education; to render them more effective in the formulation and implementation of policies on higher education; to provide for more relevant direction in their governance and ensure the enjoyment of academic freedom as guaranteed by the Constitution, the composition of the governing board was modified. This change in the CNSC governance was in consonance with Republic Act No. 8292, otherwise known as “The Higher Education Modernization Act of 1997” signed into law by President Fidel V. Ramos. The Act is a consolidation of Senate Bill No. 1721 and House Bill No. 4525, passed by the Senate and House of Representatives on June 3, 1997 and May 29, 1997, respectively. It is aimed to provide “for the uniform composition and powers of the Governing Boards, the manner of appointment and term of office of the president of chartered State Universities and Colleges and for other purposes”. By virtue of this Act, the governing Board was renamed to Board of Trustees from Board of Regents.

The administration of the Camarines Norte State College was first vested in its officer-in-charge, Dr. Emma Canuto-Avellana, until the appointment of its first president, Dr. Lourdes Apuya-Cortez on July 11, 1994. During her incumbency, the institution was guided in the pursuit of its vision of turning the College into a center for education and research, true to the ideals of the Commission of Higher education. The College has assumed the task of providing students with knowledge and skills and develops them into more responsive and competitive individuals capable of promoting changes for their own welfare and belongs to the world community as “Globally-competitive Filipinos.”

The appointment of its second president, Dr. Floria Palacio-Tagarino in mid-July 2000, marked a new milestone in the history of Camarines Norte State College. Her assumption to the presidency saw the re-visioning for the State College, research orientation and capability-building for the faculty and staff were undertaken, strengthening of extension services was given emphasis and the establishments of the production department motivated every member of the academic community. The new president’s unwavering support to the faculty and staff’s desire for excellence, her sincerity and God-centered style of administration, visibly displayed the unprecedented accomplishments of the College during her incumbency.

The 3rd president of CNSC was vested to Dr. Wenifredo Tordilla Oñate, when he was elected by the BOT on August 5, 2004 and was sworn into office on August 16, 2004. His vision of CNSC is to make it a premiere academic, research, extension and entrepreneurial institution anchored to the needs of the society by producing development-oriented graduates, equipped with appropriate knowledge and skills in utilizing locally developed but globally competitive mature technologies geared towards the upliftment of peoples’ lives.

The 4th president of CNSC was Dr. Monsito Gueriña Ilarde, who sworn into office on August 16, 2012. His administration is determined to make CNSC a premier Higher Education Institution in the Bicol Region. His able leadership is geared towards excellence in the institution’s four mandated functions of instruction, research, extension and production in order to meet the demands for internationalization and globalization.

Currently, CNSC is headed by Dr. Rusty Gagap Abanto.  He is the youngest and first homegrown president of CNSC who rose from ranks  as instructor to Professor 4.  He was designated as Planning Director, Dean, VP for Academic Affairs and concurrent Dean of the Graduate School until he was elected as the 5th CNSC President on February 15, 2017.  His administration is guided by the principle, "greatest good for the greatest number of people".